During the Second World War, millions of Jews suffered humiliation, tragedy, and death.  The treatment of Jews during this period is a horrible moment in human history.

As our family has traveled around the world, we have encountered a number of reminders of World War II and the Holocaust.  We spent somber time at Yad Vashem in Jerusalem.  Looking at pictures of adults and children the same age as our family made the horror real for our children.  After our time there, we talked in depth about this time in human history.

While in Shanghai, we deepened our learning about the treatment of Jews during World War II.  The Shanghai Jewish Refugees Museum tells the story of the 25,000 to 30,000 Jews who found safe refuge in Shanghai during this time.  Housed in the former Ohel Moshe Synagogue in the Hongkou District and easily accessible by Subway Line 4, the museum offers regularly scheduled tours in English.

Our family spent an informative afternoon at the museum.  Our helpful and kind volunteer guide told us the history of the synagogue and the experiences of Jews who found refuge in Shanghai.  Despite Japanese occupation after 1937, the French Concession in Shanghai remained under European powers’ control.  Shanghai was the only city in the world that did not require a visa for Jews to enter.  As mistreatment of Jews increased during World War II, nearly 30,000 Jewish refugees moved to the city and established their lives there.

Jewish life was concentrated in the Shanghai International Settlement, which often was called Little Vienna because of the European-style cafes and shops.  The nearly 30,000 Jews lived in close proximity with about 100,000 Chinese neighbors.  Despite differences in language, history, and culture, the museum documents numerous cases of positive relationships between neighbors.  While Jewish survivors left Shanghai following the war’s end, many returned through the years to thank their Shanghai friends.  Photos and accounts of their reunions are a heart-warming part of the museum.

Although small, the museum contains exhibits, artifacts, a documentary film, and stories of survival.  One of the survivors was Michael Blumenthal who later served as United States Secretary of the Treasury in the Carter Administration.

We spent much time looking at pictures and paintings to learn about the Jews who survived because of the welcome offered them in Shanghai.  Some refer to the Jewish settlement in Shanghai as Noah’s Ark because Jews found refuge in Shanghai just as Noah, his family members, and animals found refuge during the great flood. 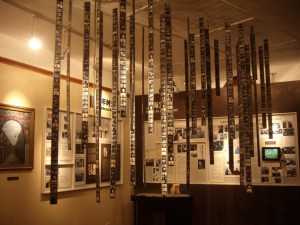 David Kranzler, a Holocaust survivor and noted historian, called the welcome offered to Jewish refugees the “miracle of Shanghai.”  He said, “Within Jewry’s greatest tragedy, there shone a few bright lights.  Among the brightest of these is the Shanghai haven.”  Visiting the Shanghai Jewish Refugees Museum reminded me of the Righteous among the Nations at Yad Vashem.  In a time shaped by tragedy, hatred, and horror, there were some examples of compassion, care, and survival.  It is good and right for us to remember them.

Should you find yourself in Shanghai, I encourage you to venture beyond The Bund and the Shanghai Pearl.  Enjoy those places, but also take time to visit the Shanghai Jewish Refugees Museum.  Look at the pictures.  Read the stories.  Imagine life in Little Vienna.  Picture reunions in the years after World War II.

It is well worth your time.